Shining Wiki
Register
Don't have an account?
Sign In
Advertisement
in: Characters, Female Characters, The Legacy of Great Intention characters,
and 5 more

Shining Force: The Legacy of Great Intention and Resurrection of the Dark Dragon[]

Anri is the princess of Guardiana. Because she has a strong talent for magic, which is rare among the people of Guardiana, she went to Manarina to study at the Arcane College. She was studying there when Max came with the tragic news that her father, the King of Guardiana, had been killed in an attack by Runefaust. She went off to grieve but Max went to her to remind her of her duty to Guardiana. She told him that her duty was to hunt down Kane and make him pay for what he did, and that she was sure that is what her father would have wanted her to do.

A Shining Force I world book implies that Anri has at least one younger sibling, but nothing is known of them.

Anri became Queen of Guardiana (mistranslated as "Gardiana" in Shining Force CD) after Darksol's defeat. It is unknown if she has chosen a King or has any children.

According to a Shining Force I world book, "Because she will inherit the throne someday soon, she has a stout heart and a cool head. She never allows herself to be swept away by emotion, and she comes to take a position alongside the hero as a leader of the Shining Force."[1] This coolheadedness has obviously remained into her reign as queen, and aside from her father's death, Anri has never been visibly distraught or at a loss in any situation.

Though obviously intelligent, Anri tends to be too trusting for her own good, a trait that seems to be common among the people of Guardiana, but which is especially pronounced in her. Even after Woldol and his enforcers bully their way into an audience with her, she readily accepts an unidentified gift from him. On one occasion she even willingly submitted to a "phony" kidnapping at Gyan's request.

Once joining the Force she and Tao have similar overall strengths. As the game progresses, she will quickly outpace Tao as a mage. She becomes over time the main spell caster until Alef joins later in the game.

She joins in time to use her Blaze spell along with Tao's for the few undead battles ahead. However, her main spell is Freeze and this spell will go as far as lvl.4. Her Freeze spell puts her as the second most cost efficient spell caster, after Tao. Damage wise for her MP costs, Anri and Domingo are the two most cost effective spell casters, sparing their MP in contrast to Alef who can waste hers.

She learns Bolt as well, which at lvl.2 will give her a large attack area and range to deal damage with.

Anri joins the Shining Force at Level 3; at this point she is one of the weakest members of the Force in terms of levels.

Domingo, while having higher MP, can also fulfill the same duties that Anri can perform since he also has Freeze lvl.4 with the bonus of being a "flyer".

She may easily steal XP from other Force members if not used sparingly, though this is not as easily done as with Alef.

She has a similar problem to Alef in that she lacks tactical spells, save elude. Like Alef, she relies on offensive tactics.

Anri: "Thank you all! Guardiana is grateful for your bravery. And Nick has sacrificed his right arm for victory."
Lowe: "Your Majesty, Cypress plans to send soldiers into the depths of the Continent."
Anri: "Then I will send Guardiana's best warriors to help them!" 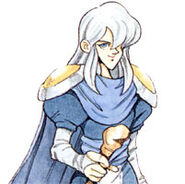