Max meets Diane on his journey. Diane tells Max all about the different kinds of beastmen in the area where she lives. Diane has bright pink hair with yellow eyes. She wears a green half-tunic with a white undershirt, brown shoes and gloves, with a green hat with a white feather in it.

According to a Shining Force I world book: "Her disposition causes her to hate unfairness and deception with a passion. She is an energetic woman who has been living a wild and free life in the mountain forests. As befits her personality, she applied herself to archery daily without thinking much of it, and her resulting skill is much admired."[1]

She is a replacement for Hans, though is effective if paired up with him. She has less speed but better overall fighting stats. Like other ranged units, she is effective against flying units.

By the time Diane joins the Force, there are already a choice of characters and it is completely possible to never see a need to use her. Lyle will eventually replace her, though she can hang on for a while due to the terrain of the battles that follow Lyle's joining. Also like any other archer, she cannot fire directly next to her.

Diane can cast no spells and has no powers.

Diane and Zylo in RODD. 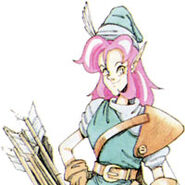 Diane close-up.
Add a photo to this gallery

Retrieved from "https://shining.fandom.com/wiki/Diane?oldid=16466"
Community content is available under CC-BY-SA unless otherwise noted.