Jogurt is a small, hamster like creature in Shining series. He is also referred to as Yogurt in the American release of the game.

Jogurt is found in Shining Force: The Legacy of Great Intention to the bottom right of Gong's Hut looking out at the sea. This is where the first encounter with Jogurt will take place. He is also encountered in Alterone Castle, during Kokichi's demonstration in Bustoke, and behind the church in Pao. When the player enters the church in Pao, Jogurt appears in the top left of the screen outside the church. Approach the bed in the corner, use the search option and Jogurt will stand up and will promptly fall down again. After these requirements have been met, Jogurt will join the Shining Force. Jogurt also makes a cameo appearance in Shining Force Gaiden: Final Conflict, although he never joins the force.

Jogurt is generally carefree and seems to have a cheerful disposition. He is viewed as somewhat of a comic relief in Shining Force: The Legacy of Great Intention, since his stats are all permanently at 1 point (excluding his movement which is 7), and his dialogue never has any connection to the game's story, instead consisting of idle conversation such as remarks about his helmet. Official art comically shows him standing triumphant over enemies and acquiring treasure while bearing a traditional sword and shield.

He can act as a decoy, or to fill up a spare slot in the team if the aim of the current fight is not to progress the storyline. If he kills an enemy, he will get a Yogurt Ring, which is a novelty item. He can also be used to hold items, and his 7 Move allows him to use or cast items where they are needed.

Jogurt does not posses the ability to gain levels nor does he posses any abilities that are beneficial for direct and indirect combat. This makes him almost completely useless and overall the weakest member of the Shining Force. While Jogurt does have high mobility, the Birdmen also have good mobility while being able to fly. He cannot equip weapons, will never level up (earning 100 XP levels him up to 1, from 1), and when you promote him, his class remains YGRT, allowing him to be promoted infinitely many times without ever changing his stats or abilities. The only way to improve his stats is with stat-boosting items, which are better saved for characters who have decent stats to begin with, since giving Jogurt an Attack of 3 makes no difference when even the weakest enemies have Defense greater than 10.

Jogurt has the ability to create a Jogurt Ring after defeating an opponent. When the ring is equipped to another character, it will change their appearance to that of Jogurt. This is just for the purpose of comic relief, as it is technically useless.

Getting screamed at by Max 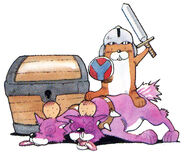 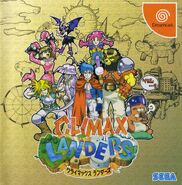 Retrieved from "https://shining.fandom.com/wiki/Jogurt?oldid=16729"
Community content is available under CC-BY-SA unless otherwise noted.