Shining Wiki
Register
Don't have an account?
Sign In
in: Characters, Male Characters, The Legacy of Great Intention characters,
and 4 more

Max is the protagonist Hero of Shining Force: The Legacy of Great Intention and Shining Force: Resurrection of the Dark Dragon. He is also a playable character in Shining Force Gaiden: Final Conflict.

Max is a young Swordsman who lives in Guardiana and has amnesia. He is trained by Lord Varios and it is because of this that other knights resent him. He is appointed by King Guardiana as the leader of a small band of warriors who are sent to investigate the Gate of the Ancients. As they are investigating, they are attacked by the Runefaust army and upon returning to Guardiana, they are surprised to see that Guardiana has fallen to Runefaust, and then Max witnesses King Guardiana and Lord Varios being killed by Kane, a general of Runefaust. Searching for Anri, the princess of Guardiana in Manarina, Max discovers that this band is now known as the Shining Force, and they must travel to Runefaust to stop Darksol's plans of resurrecting Dark Dragon. During their journey, it is discovered that Max is one of the Ancients and that Kane is his brother who was being controlled by Darksol. On the top of the Tower of the Ancients, Kane is killed by the evil master after Max frees Kane from Darksol's thrall. Max also finds Adam, an ancient robot whose destiny is to serve Max. Max eventually fights and defeats all of Runefaust's generals, even King Ramladu himself, who was also being controlled by Darksol. They are able to defeat Darksol, but Darksol uses the last of his power to resurrect Dark Dragon. With the power of the legendary sword, the Chaos Breaker, Max defeats and reseals Dark Dragon. The Castle of the Ancients crumbles, sealing Dark Dragon and Max inside, however Max cast Egress to save his comrades in a last effort. Although it seemed Max was buried with the Castle, he survived and resurfaced in Parmecia, along with Adam.

In this version of the events in The Legacy of Great Intention, Max and Kane are Ancients who came to the future via Ancient technology to escape Darksol and stop him from resurrecting Dark Dragon. Max, however, lost his memory and Kane had been captured by Darksol and controlled with a mask. After Max fights Kane, the mask breaks and Kane regains his memories. As Kane dies he relates all of his memories of the past to Max, as he still cannot remember them.

Much of the story was intended to be present within the original Legacy of Great Intention game but was lost in translation or never made it to the storyline and is referenced in Shining Force Gaiden.

Max is mentioned by a priest in Hassan, who states that Max came to Parmecia from Rune and that he was chased by some soldiers (this is of course a reference to the events of Shining Force Gaiden: Final Conflict). He mentions that he (the priest) and Bowie may be related, implying both the Priest and Bowie are descendants of Max.

Max and Adam learns that Mishaela, one of Darksol's generals is still alive. They search for her in the continent of Parmecia, but their band never returned. Adam regroups another group of warriors to find Max and defeat Mishaela. It is later discovered that Max was being controlled by Mishaela, but they eventually released her control from him. Max joins the Shining Force once again, and stops Mishaela's plan to resurrect Darksol.

Max seems to have a kind heart and is a very self-sacrificing kind of person.

Max is much more talkative in the GBA remake of the game. He's generally a kind person, but he does seem to be a bit brash at times.

He starts off with a good attack, decent HP and defense. He starts becoming powerful by the time you acquire the Light Sabre and the Chaos Breaker. Regardless, he is an all round fighter and is able to quite happily fight on the frontline throughout most of the game without any problems. Egress proves useful to flee any battle and is best used while grinding from XP to re-do battles. Also because of how AI is programmed, enemies will always attack Max first. While this can be dangerous (see disadvantages), this means Max can protect other characters from taking hits or dying by entering an enemy's attack range.

Since the battle ends if Max dies, players may be afraid to use him at all. However, it is not advisable to avoid using him as if he falls behind for this same reason. A few of the battles require walking to reach them, and it can get annoying if Max dies constantly, causing the player to have to re-do the battle. Though Max is able to gain more MP than what is required for the use of Egress as he levels, Egress is his only spell.

Max is a very powerful and skilled swordsman. His swordsmanship is recognized by all Guardiana citizens. Even the knights envy his skills. Even Kane of Runefaust praised his skill while saving Mae from Kane. As one of the chosen people of the ancient race, he is skilled in both physical and magical combat. His bloodline allows him to use spells like Egress and Bolt, and his Supernova spell is unique. He has different powers in the different games he appears in. In Shining Force: The Legacy of Great Intention, he only has the Egress spell, while in Shining Force Gaiden: Final Conflict, he also has Spark levels 1-3, and in Shining Force: Resurrection of Dark Dragon, he also has the Supernova spell.

Max: (speaking to the rest of the Shining Force) "I can't get free, but you won't die with me!"

Max: "So, it was you... I'm ashamed to say they put that mask on me when I was defeated in a fight with Lynx. Damn it! It can't be that I had the curse as my brother, Kane!"

Dark Shaman: "Ian being more troublesome than Max...?"
Mishaela: "You should not take Ian so lightly. He's a talented man, and will require extra attention when we deal with him..."
Max: "Don't think you know Ian so well, Mishaela!"
Dark Shaman: "It can't be...! How did those guys get here?!"
Max: "Thanks to Ian, I've been able to return to my old self. I'm sure you don't see how sweet Ian is!" 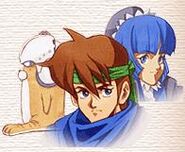 Max in the SF1 ending.

Max sprites in TLoGI
Community content is available under CC-BY-SA unless otherwise noted.