Shining Wiki
Register
Don't have an account?
Sign In
Advertisement
in: Enemies, Article stubs, Shining in the Darkness,
and 3 more

Mephisto (mistranslated as "Dark Sol" in most English versions) is the main antagonist in the game Shining in the Darkness. He first appears to the player Hiro in the castle, saying that he's holding Princess Jessa hostage in order to force King Drake to surrender his throne.

Mephisto is the son of Darksol and Mishaela. His background is provided in the prequel game Shining Force Gaiden: Final Conflict. Mishaela mentions that she intends to give birth to Darksol's son, but the exact circumstances of Mephisto's birth are left a mystery. Following Mishaela's defeat and death at the end of the game, Odd-Eye is seen taking the infant Mephisto away from the site of his parents' death, and implies that he is going to indoctrinate Mephisto into his master Zeon's service.

Mephisto's doings between Shining Force Gaiden: Final Conflict and Shining in the Darkness have not been covered in the games. He is not present at Zeon's attempted resurrection in Shining Force II, which takes place nearly a century after Final Conflict, suggesting he parted ways with Zeon's followers before then. When he surfaces in Thornwood during Shining in the Darkness, he expresses no allegiance to either Darksol or Zeon, apparently serving only himself.

In Shining in the Darkness, it is revealed that Mephisto was the court wizard Xern's disciple. Xern informs the player that Mephisto's lust for power led him to the dark reaches of the labyrinth.

The most important preparation for battling Mephisto is to become the Shining Knight, since the Spirit's blessing cuts the damage inflicted by DemonBreath in half. While Mephisto's first form goes down quickly (with a little grinding, it is quite possible to defeat him without his ever using DemonBreath), and his second form cannot cast DemonBreath at all, surviving his third form is very difficult without the Spirit's blessing. Defeating Mephisto without becoming the Shining Knight or even acquiring the Arms of Light is possible, but it requires considerable grinding and can be seen as a challenge (akin to a no-resurrection playthrough in the Shining Force games) rather than a natural alternative. 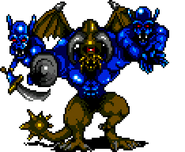 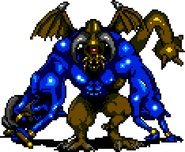 Mephisto's first encounter at the castle. 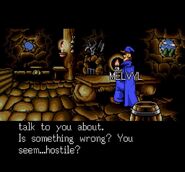 Melvyl at the Tavern reveals himself as Dark Sol