Shining Force Feather (シャイニング・フォース フェザー, Shainingu Fōsu Fezā) is a Tactical RPG for the Nintendo DS that was developed by Flight-Plan and published by Sega. It was released in February 2009 in Japan.

3,000 years ago, a war between the Shining Force and the Kyomu plunged the world into chaos. That war is remembered primarily in items known as artifacts, which were sealed away after the war. 3,000 years later, a young treasure hunter named Jin and his friend Bail discover a hidden ruin where a lost artifact is found and accidentally awakens an android girl named Alfin. A new adventure in search for lost artifacts has just begun.

Playable Characters (The Descriptions are translations of their profiles from the SFF: Master Guide)[] 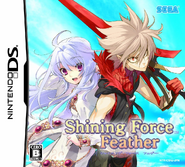